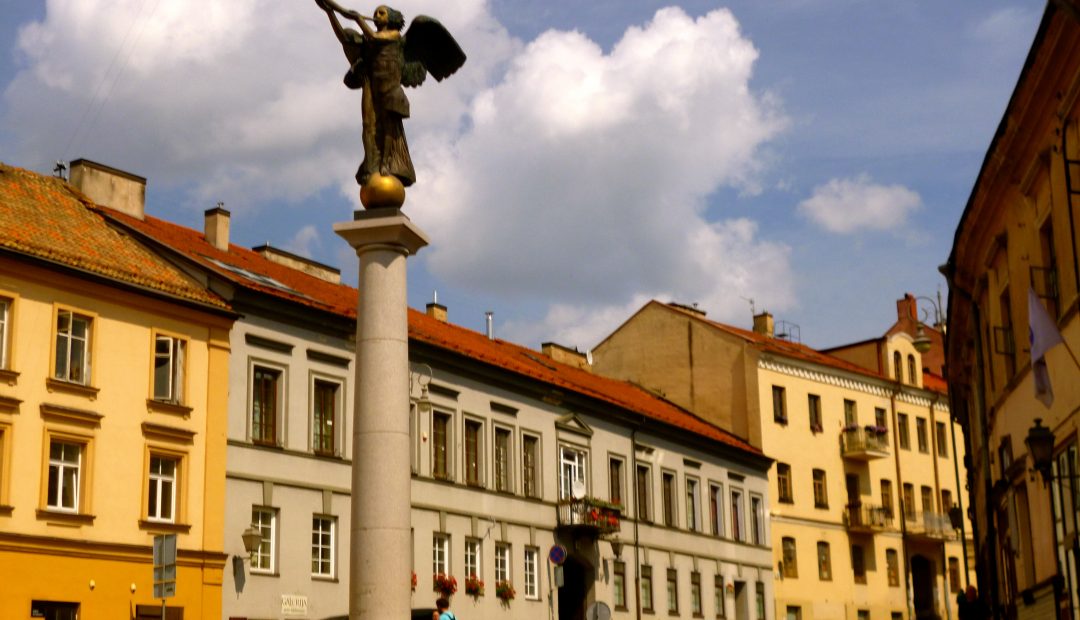 Often eclipsed by its Baltic neighbors, Latvia and Estonia, whose coastal capitals are popular go-to’s for the cruise ships, Vilnius, Lithuania is an easy, if not somewhat unknown, Baltic favorite.

From its rich history and impressive and varied architecture to its modern-day café-culture and alternative, artsy vibe, Vilnius, Lithuania holds its own as a standout European city.

In its early history, all manners of language, religion and culture were welcome. It was known as a city of great diversity and all-encompassing harmony. (I love that!) Unfortunately, its history is also full of more than its share of invasion, occupation and devastation.

Despite this, Vilnius continues to grow and thrive and while there is no shortage of things to do and see, here are 3 reasons why Vilnius, Lithuania is the belle of the Baltics.

1. The Old Town: Architecturally Diverse With The Perfect Blend of History and Culture

The Old Town of Vilnius, one of the largest in Europe, is cool, cosmopolitan with a hip, laissez-faire, café-culture vibe and a uniquely stunning aesthetic. The historical center of the city, Old Town is full of significant cultural sites; its long and rich history reflected in the diversity of its architecture.

Sidebar: The term “Old Town” refers to a city or town’s historic or original core. Although the city itself is usually larger, these designated areas commemorate a city’s origins and typically have undergone thorough renovations.

Since the Middle Ages, Vilnius has been in a constant state of development. Medieval Vilnius gave rise to its radial layout, developed around its Town Hall and made up of narrow, curved streets and intimate courtyards. This Old Town is the perfect place to just roam around and get lost.

While Old Town has no shortage of main squares and fantastic historic buildings, the most iconic is the Vilnius Cathedral and Tower in Cathedral Square. The stark white neoclassical cathedral sits in contrast to the medieval, baroque and neoclassical styles of the bell tower. It is striking to look at and is understandably one of the most picturesque places in town.

This contrast in style is one of Old Town’s best features. There is the outrageously cool gothic style of St. Anne’s Church and the classic baroque style of the Church of St. Casimir, prominently located at Town Hall Square. And not to be missed are the underground medieval cellars, remnants of massive fires devastating the city on more than one occasion, now occupied by cool shops, pubs and restaurants. Vilnius’ Old Town is like a never-ending gift of extraordinary sites, each a nod to their historical time.

Acknowledging history is a palpable element of Vilnius’ character and evidence of this goes beyond its iconic buildings. There are remnants of the 16th century defensive wall that once completely enclosed the city. The Museum of Genocide Victims, located in a former KGB building, highlights and exposes the atrocities committed in Lithuania under Soviet and Nazi rule. There are also sculptures and symbols throughout Old Town honoring the vast number of war victims and prominent Lithuanian cultural figures.

Old Town is more than just its history. Globally acknowledged in 1994 as a UNESCO World Heritage Site, it was designated in 2009 by the EU as the European Capital of Culture.

Pilies Street, the main artery of Old Town running from Town Hall to Cathedral Square, is the hub of its café and street market style. And all throughout Old Town, modern day shops and restaurants comingle with traditional ones. Just having a wander around the meandering streets, you’ll find random cafés tucked into alleys, hidden shops, gorgeous courtyards and other unexpected nuggets that add to Old Town’s overall charm.

While there are no shopping malls in Old Town, there is no shortage of retail opportunities. International name brands and chic, stylish boutiques, many featuring local designers, add to Old Town’s culture credibility. And of course, local handicrafts – linen, amber and glass, in particular – and souvenirs are readily available. Another bonus of aimlessly wandering Old Town is stumbling across hidden shops or open air markets.

The overall visual appeal of Old Town is best seen from a variety of pretty impressive viewpoints. Spectacular panoramic views can be seen from Hill Park, home to the Three Crosses monument, another popular Old Town landmark, and Television Tower, one of the tallest buildings in Eastern Europe.

There is also the so-called “secret viewpoint” (outside of Užupis, near the Hill of Grand Duke Gediminas’ Grave – while it’s not necessarily unknown, you won’t find it on a map), where the sweeping view is worth the small amount of effort needed to find it / get there.

Separated from the city center by the river Vilnelé (literally meaning “on the other side of the river” in Lithuanian), is Užupis – an authentically avant-garde district catering to the quirky, the artists, the ones who are content to live and let live.

For centuries, Uzupis was just another city district. After WWII demolished the city’s substantial Jewish population and completely changed the city’s demographics, Užupis was abandoned; it fell into disrepair and over time became a rather undesirable area.

Near the end of the 20th century, Užupis underwent a bohemian revival and on April 1, 1997, declared itself an independent republic – The “Republic of Užupis” – complete with its own constitution, flag, currency (I actually cannot vouch for the existence of actual Uzupis cash; I did, however, get my passport stamped here), president, cabinet of ministers, 12-person army and anthem.

Walking around Užupis is like walking through an open air art gallery. There is artwork everywhere – paintings along the river, sculptures hanging in trees, street art and random artistic creations in nooks and cranny’s.

The true spirit of Užupis, however, is found in its Constitution, containing 39 articles and its 3 mottos –

This cheeky micronation celebrates its independence, “Užupis Day,” every April 1, of course, with mass partying in the streets. On Užupis Day in 2002, “The Angel,” a sculpture of the archangel Gabriel blowing a trumpet, was unveiled in Užupis’ main square. The Angel symbolizes artistic freedom and has come to be a bit of a mascot for “Uz”.

Overall, Užupis is a bohemian oasis, tucked away in the pocket of an already remarkable city. Where Old Town comes across as having more obvious mass appeal, Užupis is the wickedly awesome younger sibling providing perfect balance and contrast to Vilnius’ already superstar status.

3. Vilnius’ Alternative Underbelly: Even Outside of Užupis, Vilnius’ Spectacular Eccentricities Are Everywhere

The artsy soul of Vilnius is not limited to Užupis. Roaming in and around Old Town you’re bound to uncover all kinds of quirky treasures – an unexpected piece of art or sculpture you see when you turn a corner or the more obvious Frank Zappa head and Literary Street – all revealing the inherently alternative underbelly of the city.

I spent a morning in search of the infamous Frank Zappa head – the first statue in the world that honors the artist. Yes, that’s right – a bronze Frank Zappa head, in the middle of Vilnius. Bizarre? Perhaps. Or not. 😉

For 50-years under Soviet rule, Lithuanians were not free to criticize society, much less listen to Western music. And anti-establishment music like Frank Zappa was banned in particular. It was not until 1991, when Lithuania broke away from the Soviet Union, that Western music was freely available.

An unexpected consequence of independence, it turns out, was a number of pedestals all around town, once topped with statues of Lenin and Marx. One crafty Vilnius local, Saulius Paukstys, combined his newfound love for Zappa music with a not so subtle snub to communism. He founded the Frank Zappa Fan Club, generated a sufficient amount of support and commissioned from one of Lithuania’s best sculptors a bronze sculpture of Zappa’s head for one such pedestal.

While Zappa himself has no particular connection to the city, his music represented a new time for Lithuanians, many discovering freedom of expression for the first time. The sculpture symbolizes the end of communism in Lithuania – in cheeky Vilnius style, I would say.

Another eccentric nugget to be found in the winding streets of Old Town is Literatu Gatve, or Literary Street, rumored to have been named in honor of a poet who lived there centuries ago.

As part of the post-Soviet revival effort, a group of artists wanted to give new life to the street and began to adorn it with little works of art – dedications to literature, and in particular, literature with Lithuanian connection.

Since 2008, artists have transformed this street into a living work of art, as each year, more pieces are added. There are painted plaques and bizarre sculptures (decorated dentures? Yup!) each numbered for identification. The result is an eclectic collage that works.

This unexpected street is a can’t-miss for any visit to Vilnius and just another in a long list of terrestrial treats in this unconventional, imaginative city.

It’s no secret, I love Vilnius! This run down just scratches the surface of what Vilnius has to offer. It’s the kind of place I could live in for a while.

Have you been? Did you love it as much as I did? Drop a comment below.

The Constitution of Užupis