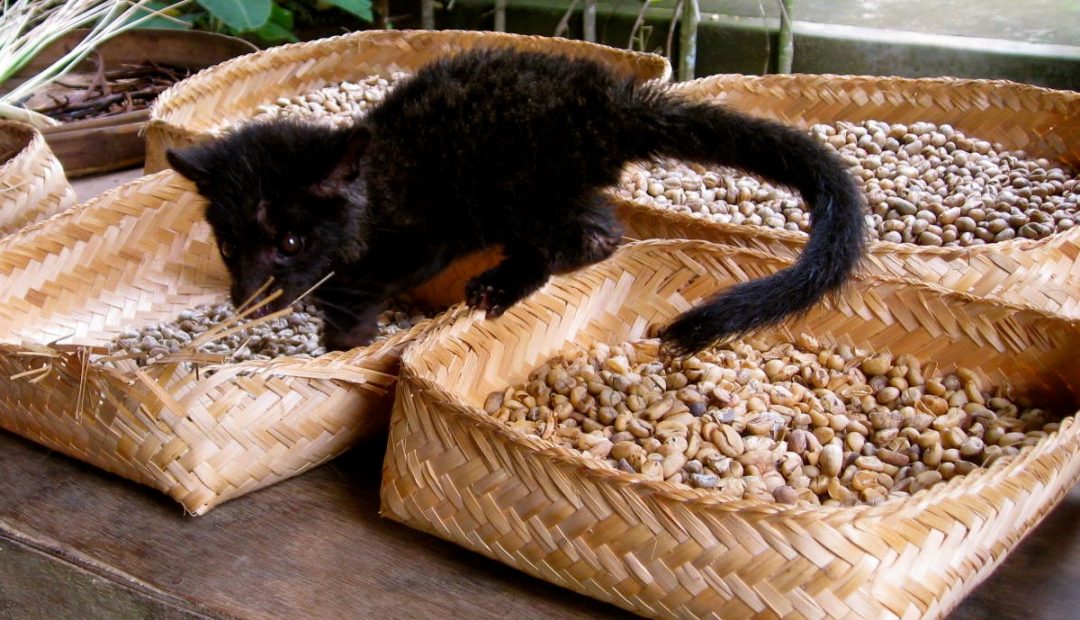 I remember a fancy dinner one night in Miami many years ago. There was a cup of coffee on the menu for $50. Yes, it was Miami Beach, but FIFTY DOLLARS? For a cup of coffee? Apparently, it was some rare bean that had been eaten by an animal and came out the other end. Nothing about that sounded good or right and needless to say, no one ordered a cup.

Fast forward to Bali, Indonesia and on the way back from a day trip to the incredible Batur Volcano, we stopped at a coffee plantation. Indonesia is known for its coffee and at the end of the plantation tour, there was a coffee tasting. Yum.

Midway through the tour, we came upon a cage with a cat-like animal inside. It was the “Luwak” – a animal that feeds on coffee berries which, once passed through the cat, is processed into coffee. The very coffee on the menu at the restaurant in Miami.

And so we discovered, Kopi Luwak, the most expensive coffee in the world.

The “Luwak” is the local name given to the Asian Palm Civet, a member of the civet family which consists of dozens of different types of relatively small, nocturnal, cat-like animals found mostly in tropical forests. The Luwak is mostly “frugivorous” meaning that it likes to feed primarily on berries and pulpy fruit, though it will also eat small vertebrates, insects and seeds.

In the early 18th century, Indonesian coffee farmers were prohibited from picking coffee berries for their own use. Incredibly, the farmers learned that the local civets would eat the fleshy pulp of the coffee berry but leave the coffee seeds undigested in their droppings. The farmers collected the droppings, cleaned, roasted and ground them and made their own coffee, the taste and quality of which was exceptional and quickly became the most sought after.

It begins with the Luwak eating the coffee berry (or “cherry”) – the fleshy pulp that surrounds the inner bean (the inner bean is actually a seed). The berry stays in the digestive tract of the civet for about a day, during which a natural fermentation process occurs wherein the animal’s stomach acids and enzymes digest the pulp. The inner bean, encased in an inner skin or parchment, can not be digested.

The beans are then defecated in clumps, their shape intact and still covered with some of the berry’s inner layers.

The beans are dried for a few days, after which they are put into a wooden mortar and pounded with a pestle by hand. The inner bean is harder than the wood, so this process acts to remove all of the dried outer casings, leaving an intact bean. Defective beans are discarded and the rest are washed and dried over a course of days.

The beans are now ready for roasting.

I Know What You’re Thinking…

This is all about coffee from beans that were picked out of cat shit. I get it – it’s kind of gross. How can you be sure there is no poo in your coffee?

The beans that are crapped out are still covered with some of the berry’s inner layers. During processing, which necessarily includes multiple cleaning processes, these layers are removed. And of course, the roasting of the beans finally eliminates any remaining bacteria.

Scientists have studied the safeness of Kopi Luwak. They found that while the beans in the feces are more contaminated than normal coffee beans, once the beans are processed, they actually have been found to contain a lower level of bacteria contamination than other coffee beans.

Why Is Cat Poop Coffee Better?

The true greatness of Kopi Luwak is attributed to 2 elements: selection and digestion.

Selection occurs when the civet decides which berries it is going to eat or not eat. In the wild, the animal exhibits its own natural selection process and instinctively selects only the ripest berries, which is believed to have an impact on the end-product coffee’s flavor.

Digestion, as described in more detail above, occurs when the Luwak eats the coffee berry and the protein structure of the bean is altered, reducing bitterness and increasing flavor.

These two elements combine to yield a high-quality, extraordinarily flavorful coffee with no bitterness.

With a process this rare and specific and a lucrative end product to boot, it’s disappointing but not surprising to note that Kopi Luwak is not immune to exploitation.

Some farmers took to caging the animals, often in inhumane conditions, and force feeding them nothing but coffee berries. This affects the quality of the end produt in a number of ways.

In the wild, civets freely roam the forest and select only the most ripe berries. When caged, however, the animals have no choice in what berries they will eat. This eliminates one of the two elements that make Kopi Luwak better than regular coffee – selection. Additionally, the added stress placed on the caged animals (which sadly often leads to illness and premature death) is believed to have an impact on the quality of the coffee.

As if the treatment of some of the animals and the degradation of the selection process weren’t enough, it is estimated that 70% of Kopi Luwak is NOT 100% pure, and in fact, may not even contain any actual Kopi Luwak. Fraudulent labeling is rampant and it appears the coffee industry isn’t too interested in cracking down on these concerns.

Natural, authentic Kopi Luwak is harmless to the civets and does indeed make for an excellent cup of coffee. Our plantation tour included a free coffee tasting at the end and for an extra 50,000 rupiah (less than $4.00), we were able to have a cup of the Kopi Luwak.

Despite how good the coffee tasted, smooth and without any bitterness, the darkside of the Kopi Luwak industry has compromised the pricey brew. Unless you are certain that you are buying authentic Luwak coffee from wild and not caged civets, I would suggest thinking twice before indulging.

Verdict: Not worth it.

Disclaimer: Coffee loving is a serious thing. I get it. This is MY opinion only on the Luwak coffee being not worth it. Curious? Try it for yourself. If nothing else, it makes for a great story! ☺

With coffee from beans shat from a cat, there is no shortage of fun to have here. How many different ways can we say this?

Have you tried Kopi Luwak? What did you think? Drop a comment below!

Rocking Out In Granada, Nicaragua