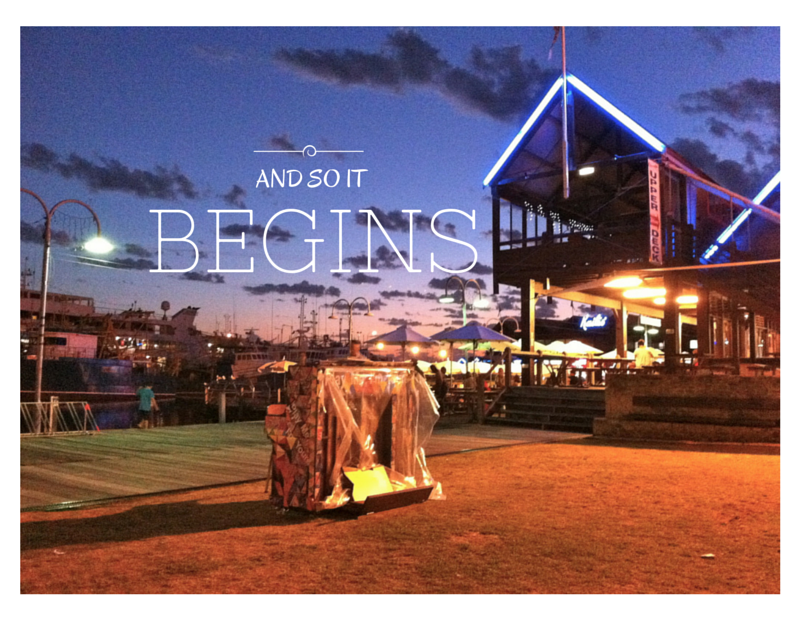 Making the decision to travel the world was easy. Deciding where exactly to begin was another story. Where do I start? I mean: literally. Out of any spot on the globe – how was I to pick one? Should I start close to home and work my way out? Go to the furthest point away and work my way back? Close my eyes and pick a random spot on the map?

On the phone one night with a friend, I explained my dilemma. “Perth,” he said. “You should start in Perth.”

Perth? Where the hell is that?

My friend had spent some time in Australia and though he himself had never been to Perth, a good friend of his was living there. I had already decided I was not going to go to Australia (or New Zealand for that matter) on account of it being too big and too expensive; however, the more I thought about it, the more I liked the idea:

And with that, Perth was it; the place where I would begin my adventure.

No Plans? No Problem!

I had long decided that there would be no itinerary for my “RTW” (Round-the-World). I was comfortable with winging it and so didn’t plan anything in advance. I narrowed down a departure day and booked the ticket – Atlanta to Los Angeles; LA to Tokyo; Tokyo to Singapore; Singapore to Perth. 3 days of travel – cakewalk! At the time I left, I had a grand total of 2 items planned – the one-way ticket out and 6 nights of accommodations in Perth.

For the accommodations, I wasn’t ready to jump right into a hostel and with Perth being one of the most expensive places I went to, I booked my stay in advance via Air-B-n-B – a most excellent decision. I chose to stay in the spare bedroom of a young local who himself had done some world travel. From picking me up at the airport and showing me around the city (fish-n-chips at Cicerello’s in Freo… yumm!) to providing my first experience with Vegemite and giving me invaluable travel tips, starting off with essentially a home-stay was perfect. Or should I say, Perth-ect. 😉

Here I Am! Now What?

I spent a week in this isolated, Western Australian city getting to know my way around, operating basically as a tourist and working out the small details that would prove to be a never-ending constant throughout the next 22 months – figuring out little things like money & SIM cards; deciding what to do locally; getting a feel for public transportation; and figuring out how long I wanted to stay, where I was going to go next and how I was going to get there.

Being able to address these issues without having to worry about language barriers and feeling like I could pass for a local made my transition from so-called normal life to nomadic life pretty seamless. (Until I opened my mouth to speak, that is. We Americans love accents. It never occurred to me that non-Americans think we’re the ones that have an accent!)

And while I thought I would head straight to Asia from Perth (it’s really close to Bali), I realized on the flight over that since I was already here, I may as well see a little more of Australia and add in New Zealand too while I was at it. There was no reason not to. I compromised the uptick in budget with not staying too long and was giddy to already see a benefit of the decision to wing it.

Of course, knowing I had a contact in the city proved to be an absolute bonus. I was in touch with my friend’s friends, Mike & Angela, as soon as I arrived and a night out with them a few days after my arrival was a most excellent introduction to Australian fish-n-chips (some of the best in the world) and Aussie hospitality.

Side bar: Driving down a major road, Ang spotted a guy face down on the sidewalk in a dark alleyway. Tires screeching, Mike slammed on the brakes and stopped the car; Ang ran out and over to the guy to make sure he was all right. She sat with him and called for help. The guy turned out to be ok, but I found myself impressed with the selfless instinct to stop the car and run to a random stranger face down in a dark alleyway without at all knowing the circumstances. “That’s Ang,” Mike proudly said about his wife. And from what I saw on that night, in the rest of my time Down Under and from the awesome Aussies I met along the way, “that’s Aussie.”

Filed under what I would later call “Travel Karma”, it turns out I had another friend-of-a-friend in the city. Perth local and camp-mate of my college friend Joui, Bronwyn was a superb steward of Aussie hospitality, showing me around one of my favorite places in Perth, Fremantle, with a tour of its historic roots and a night out on the town in “Freo’s” hip bar scene.

And So It Begins..

Sipping on beers at Freo’s famous Little Creatures Brewery with newly made friends who gave me the run-down on “Aussie-speak” (tracky dacks, esky, arvo, mackers, cruisey, bugger, capsicum and on and on!), and watching the spectacular sunset over the Western Australian coast, I knew it was real.

My trip had begun.

And it simply could not have been more Perth-ect!

If you were taking a trip around the world, where would you begin?

Visual Trip – Round the World