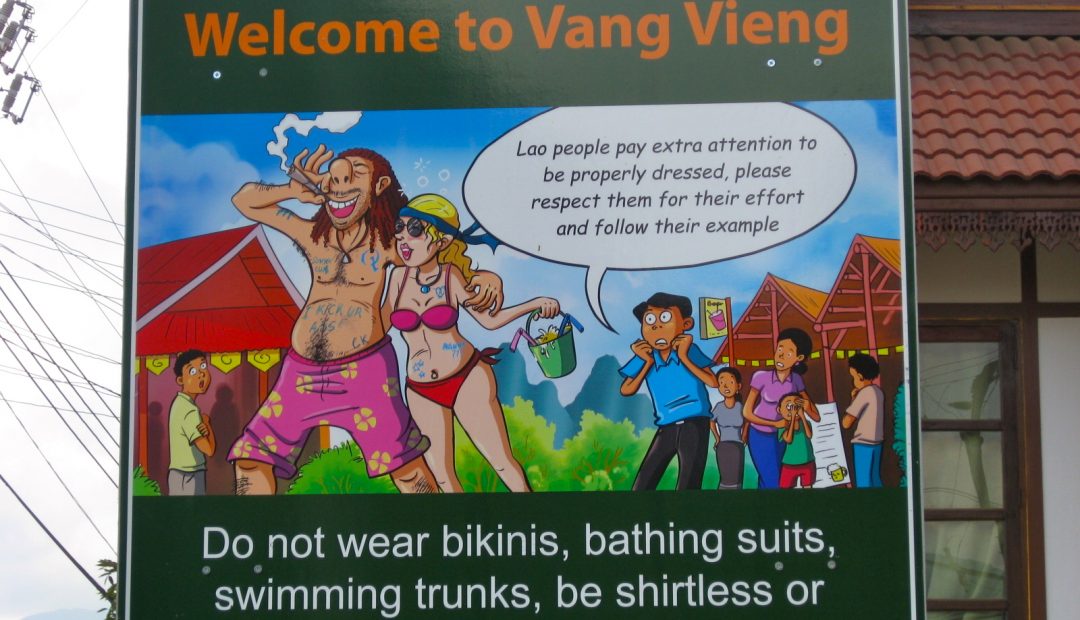 In Part I of this series, I answered some basic backpacking and travel questions, covering flights, finances, lodging and food. Here in Part II, I get to the rest – communication, clothing, cleanliness and more.

9. Were there language barriers anywhere?

In many places the world over, especially ones focused more prominently on tourism, obvious efforts are made to help travelers. Menus and signage are translated into English – even in the most off-the-beaten-path places (sometimes providing a little comic relief, the good intentions still most definitely acknowledged and appreciated) – and it is not uncommon to find locals who can speak English well enough to communicate.

I began my RTW in Australia, New Zealand and Singapore and for this trio of countries, language was a non-issue. From there, as I ventured further into Asia, language differences were more apparent.

Not knowing what I was ordering in a restaurant and trying to get directions come to mind as the most challenging language-related issues. Despite this, however, I would say that overall, language was never really a barrier. Differences in language never rose to the level of an obstacle that impacted my experience in any significant way.

In fact, I was keenly aware of and quite overwhelmed at how ubiquitous the English language is found the world over.

Sidebar: I spent a week at an Ashram in India with about 20 people from all over the world. I was the only one from the US; there were 3 from the UK and 2 from Australia. Everyone else spoke English as a second language, including, of course, our yogi. Despite the English speakers being in the minority, the only language spoken (when we spoke!) was English.

As a woman traveling alone, knowledge is your best friend, and knowing social norms, especially when it comes to dress, is essential. Though there are only a handful of places I traveled to where dress code is a thing, I complied – even when it pissed me off.

Dress code came into play the most when I was in India. And this is where it pissed me off the most. Despite the stifling heat, I was covered almost the entire time I was there (in cities like Mumbai and Rishakesh, this was not an issue) – long pants to cover my legs and a scarf to cover my shoulders and arms (t-shirts were ok; tank tops not so much). This bothered me because I was not covered out of respect (compared to being in a Temple, for example); rather, I was covered for my safety.

And don’t get me wrong – despite the terrible news stories that we hear about incidents in India, wearing a tank top does not mean you will be raped (if I may be so blunt about it). It will, however, bring you constant, unending and unwanted attention.

In general, I tried to just be aware of my surroundings and act accordingly. Respecting cultural norms is, in my opinion, always the way to go as a responsible traveler. I know for sure that it served me well.

Prior to the trip, I thought that I had this subject more than covered, as the sheer number of packing lists from other travel bloggers that I studied for years before I left qualifies as effing ridiculous.

I took the average of the lists from those that came before me and came up with a wardrobe that basically included a few pairs of shorts, a few capri / pants, one each jeans and leggings, a few skirts that were multi-functional, a few short sleeve technical (non-cotton, moisture-wicking) tops, a few long-sleeve ones and a few technical tank tops. Add to that a bathing suit, something to sleep in, delicates and that’s about it.

Verdict on my wardrobe: FAIL!

I realized almost immediately my mistake – the amount that I took was fine; the actual items I personally decided to select for my backpack: monumentally wrong. I was so focused on having technical and multi-purpose clothing that I ended up with a bag full of items that I didn’t even like and certainly didn’t want to wear. (I don’t wear capri’s at home, why would I want to wear them traveling?)

The good news is, no matter what you pack, or don’t pack as the case may be, you can always get what you need on the road (often, for much cheaper than what you would pay at home).

The lesson learned for me is pack light, go for items that more or less match each other and of course, pack what you like and will want to wear. You will, after all, be wearing what feels like the same thing day in and day out.

12. How did you keep your clothes clean?

Laundry methods definitely varied with location. In many countries, having laundry done for you is relatively inexpensive. In Southeast Asia, for example, wash and fold service is about a dollar a kilo (1 kilo = 2.2 pounds). In real terms that means I was able to get full loads of laundry done for $1 or $2.

Some hostels offer laundry service as a free or paid-for amenity, with either drop-off service or self-use machines. I stayed in a hostel in Serbia that offered to do your laundry for free if you stayed 3 or more nights.

And of course, you’ll be hard pressed to find a backpacker that hasn’t done laundry in the sink at some point, whether because it’s the only option or the cheapest. I did it quite often.

Yes! For the most, past at least. 😉 There were bucket showers in India, which I actually liked once I got the hang of it; freaky contraptions for hot water with wires coming out in all directions in many showers in Central and South America; and no shortage of cold-water-only showers, including some awesome outdoor ones in Bali and Nicaragua.

But all told, no matter the quality of the accommodations, the basics were always available, showers included!

14. Talk about the people you met.

It’s been said before and it’s true: the places you go to are one thing, but it’s the people you meet along the way that make the experience.

Meeting people when you’re traveling is a constant. Whether it’s engaging with locals or meeting the person sleeping in the bed below yours, people are everywhere. Despite being a solo traveler, I was very rarely alone. And the people that I met – travelers and locals – are some of the coolest, most welcoming, fun, interesting, open-minded, smart, curious, generous and engaging people on the planet.

When you’re on the road, it’s easy to spot the travelers. And by virtue of the circumstances you are under when you meet, you already have something in common. Striking up a conversation is easy and friendships happen quickly. The person you meet waiting for a bus or a train may end up being your bestie or a travel partner for a period of time. It is completely normal for solo travelers link up together or join groups. It’s easy. And it’s fun.

15. Which country was the friendliest / least friendly?

This planet is absolutely teeming with beautiful, lovely, friendly people. In every corner of the globe, it is undoubtedly the people that add to the richness of the experience of travel. From day one and throughout the entirety of the trip, I was keenly aware of how nice everyone is – locals and other travelers alike!

As for the unpleasant title of least friendly country, there are a few countries that have a bit of a reputation, if you will, from other travelers as being lower on the friendly scale. I am loathe to repeat which ones here, however, as I cannot personally vouch for their unfriendliness.

To illustrate my point – Coming into one of these allegedly unfriendly countries, I was expecting and prepared for surly attitude from the locals. And guess what? That’s exactly what I got! They were right! Having validated the haters, my travel mate and I decided to try an experiment. Despite having already declared this entire country and all of its people the most unfriendly, we decided to kill them all with kindness. We changed our attitude as we interacted with the locals. The response? They were lovely. It was almost like a switch was flipped and suddenly everyone was friendly.

Lesson learned? The opinions of the haters unconsciously sank in before ever stepping foot in the country. I arrived assuming everyone was unfriendly because that’s what I had heard. And with this attitude, everyone seemed unfriendly. As soon as I changed my attitude, so too did everyone come across as friendly. Huh. Imagine that. That was easy!

So no, there were no unfriendly countries. At least not in my experience. There may be isolated incidents of unfriendly people, but you can find that anywhere.

16. What countries felt most / least foreign?

The most foreign feeling country, for me, is India. The contrast in its level of development, or lack thereof, its culture, cows in the middle of busy streets and the full-on assault on the senses was the most disparate as compared to the United States. The runner-up is Morocco, with its ancient medinas and multitude of minarets, the aesthetics of which immediately and automatically make you feel as if you are in a completely different and exotic place.

The least foreign feeling countries are Australia and the UK. Oh yes, they have an accent (and they are beautiful, lovely accents to hear, indeed!), but the sameness of language and culture rendered these countries the least foreign-feeling to me.

Are there other questions you have about travel or backpacking? Drop a comment below. If you haven’t already joined the Cheeky Universe mailing list, you can do so here.

The Constitution of Užupis

The Day I Drank Coffee From Beans Shat From a Cat